From the professor who brought us 2016’s “All I want for Christmas is White Genocide” tweet, comes another inane and callous blurb capturing his depravity as it relates to the slaughter in Las Vegas Sunday night.

George Ciccariello, the professor of politics at Drexel University who is known to go on white supremacist tirades, tweeted, “White people and men are told that they are entitled to everything. This is what happens when they don’t get what they want.”

He explains that for the past 40 years a “narrative of white victimization” has been building and this is the “spinal column of Trumpism.” The most extreme form, he asserts, is the “white genocide myth.”

“Yesterday was a morbid symptom of what happens when those who believe they deserve to own the world also think it is being stolen from them,” he tweeted.

When questioned several times on Twitter what sense it made for a white man to go on a rampage killing white people because his feelings of “white victimization” led him to believe whites are being targeted for extermination, Ciccariello had no response. He did, however, go on a tirade against Tucker Carlson for a story in the Daily Caller about publishing a story inaccurately deciphering his tweets, and complained about getting hate email and death threats.

The professor, who identifies himself as a Communist, has garnered much media attention through his outrageous and inflammatory tweets. He has repeatedly defended his white genocide tweet, stating, they are not tweets “that call for any kind of violence.”

He also goes after Lawrence Jones on Fox News for calling for the professor to be fired for blaming Trump for the tragedy in Las Vegas. Jones’ claim is a stretch. Ciccariello points out that Trump’s base is composed of white supremacist patriarchs, but does not blame Trump. Unlike the Democrats, he also doesn’t blame guns.

“To believe that someone who would shoot down 50 people wouldn’t circumvent any gun law you pass is the height of delusion,” he tweeted. “But liberal escapism means talking about easy questions and proposing easy non-solutions rather than talking about who kills and why.” 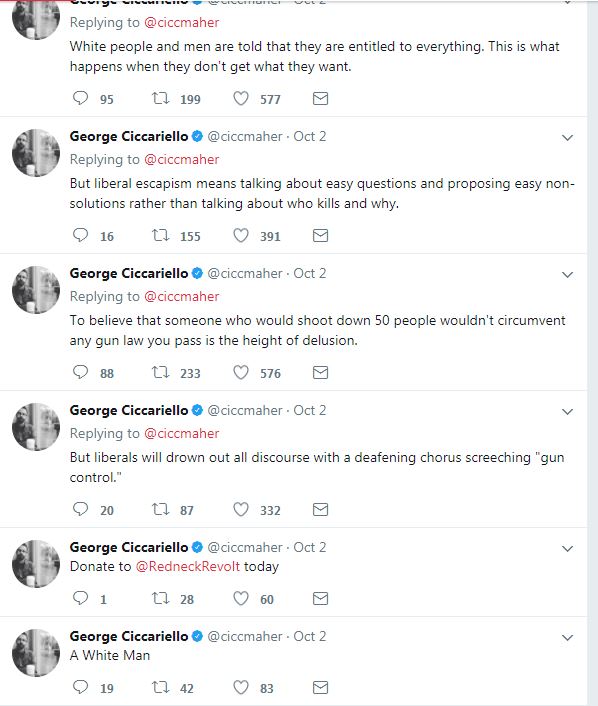 Interestingly, most of his agreeable fan base followers are Democrats under the impression he’s a Democrat as well.

The Las Vegas massacre on October 1, 2017 was the worst mass shooting in recent American history, leaving 58 people dead and more than 500 injured. Shooter Steve Paddock holed up in two rooms on the 32nd floor at Mandalay Bay with 23 firearms including bump fire stock modified semi-automatic rifles  and fired into the crowd of 22,000 attending the Route 91 Harvest Festival.