Today a call of a “direct threat to campus safety” at Evergreen State College came into 911. School officials closed the school for the day. Law enforcement staked out the campus. This came on the heels of persistent protests…

The students at Evergreen State College in Olympia, Washington are no more. They have been steadily brainwashed over the course of their schooling by liberal educators who did not understand precisely what they were creating. They should have seen it from a mile away.

Call it a cult, Stepford students, robo-students, brainwashed liberals, mindless idiots… it’s all the same. They have zero reasoning skills and lack basic critical thinking skills. They can only spit out what has been reinforced through indoctrination. They’ve been taught a lot about social injustices and white privilege and have been brainwashed into being social justice warriors. The whites feel sorry for the minorities; and the minorities are taking it to the bank to see what they can get for it. They have lists of demands as long as your arm and they’re looking at you to pay up.

So is the story of Evergreens State College where, “Hey, hey, ho, ho, a honky professor’s gotta go!”

(President and other administration cursed at, screamed at by anarchists.)

Bret Weinstein, a LIBERAL biology professor, refused to leave campus for its annual “you are a racist day.” Not the real name, but it fits. Evergreen College practices segregation once a year. It’s a tradition where minorities don’t show up on campus and instead go to workshops to talk about racism with all their other colored friends. The whites stay on campus and attend white privilege/racism indoctrination.

This year, the administration changed things up and decided whites would go off campus for the day. Step in from stage left, liberal Bret Weinstein, who wrote a nice letter to the author of the email he received about the change-up.

In no uncertain terms, Weinstein let it be known he was not leaving and would stay to teach his class.

“You may take this letter as a formal protest of this year’s structure, and you may assume I will be on campus during the Day of Absence. I would encourage others to put phenotype aside and reject this new formulation, whether they have “registered” for it already or not. On a college campus, one’s right to speak – or to be – must never be based on skin color.”

And with that, the animals came to feast.

(Professor Bret Weinstein being cursed at and harrassed by students.)

The President of Evergreens, George Bridges, is nothing short of an enabler and has no business running this school. He lacks common sense and, most of all, a backbone. The students demanded to be released from homework because it got in the way of their protesting and he obliged. The dimwitted administration is encouraging even more of this insanity by promising to work with these animals “to address their issues.”

In liberal college-speak, this means, “You can have the moon and the stars and whatever else you demand.”

Bret Weinstein, on the other hand, is being warned by campus police he’s not safe on campus, and the college administration is not taking action, as shown in these tweets. 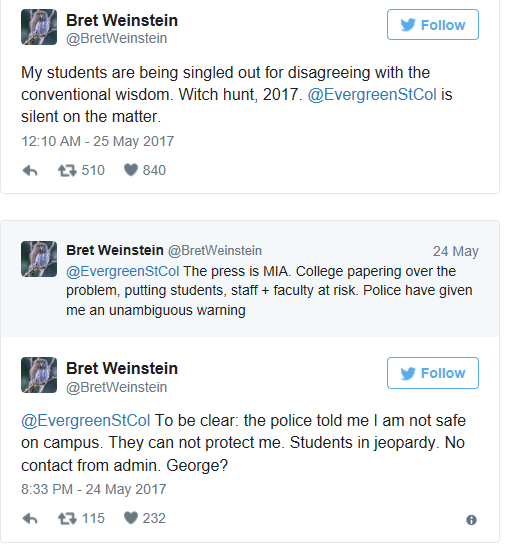 Since the release of videos on social media which drew negative attention to the protesters, they’ve changed their tune a bit and are crying racism. When a letter goes out from students to the press, it’s a “club” or “clubs” on campus behind it. These groups are the true trouble makers with long lists of grievances because that’s what they do best. Generally, a college club is a collective body with a shared purpose and agenda. The Latino club is crying racism. The black club is demanding reparations because of slavery 150 years ago. The LGBT club is screaming that they’re discriminated against. The College Republicans sit on the sidelines laughing and making fun of the insanity as they’re ganged up on by all sides of the equation. It’s campus lunacy as seen here in a press release sent to the local newspaper, The Olympian:

“What started out as anti-black comments on social media has turned into the dismissal of the rights of students and femmes of color, physical violence by police, and false sentencing of students protesting. Black trans disabled students are actively being sought out and confronted by campus police constantly; police are refusing to explain their actions and harassment. Students will not stand for this anymore, as students of color have never felt comfortable on campus and have not been treated equally.”

The environment at Evergreen has become so polluted it’s drawing the attention of state legislatures. Republican State Rep. Matt Manweller responded to the recent anarchy on Fox Business.

“These students, in their ignorance and anger, are trying to undo the civil rights movement and return us to a Jim Crow era of education policies,” Rep. Manweller told FOX Business. “We said no to segregated education 50 years ago and we’re saying no today.”

Today he announced a bill to privatize the college over the next five years because, he said, “Public money should never be spent on institutions that advocate for openly racist policies.” He is pushing to remove $24 million in capital funding from the school and ordering an investigation on whether any civil rights were violated.

“Colleges and universities need to be a place that is open to debate and the free exchange of ideas regardless of skin color, religion or ethnicity. Public money should never be spent on institutions that advocate for openly racist policies,” Rep. Manweller stressed.

Of course the state democrats will fight this tooth and nail because they seem to feed off the discord and histrionics. However, what is playing out at college campuses is veering into a dangerous place. Evergreen is a perfect example and hopefully the administration will take a hard look in the mirror and figure out they’ve got a cult of anarchists that need to be expelled. There are students paying tuition to learn and 50 or a hundred students have no business assaulting professors, hurling demands and carrying on like they belong in a cage.

2 thoughts on “A Dangerous Cult Mindset Brewing at Evergreen College”