Clanton was booked into Berkeley Jail on three felony counts of suspicion of assault with a deadly weapon that isn’t a firearm and assault causing great bodily injury, and a misdemeanor charge for wearing a mask to evade identification during the alleged attack. His bail is set at $200,000.

Evidence against Clanton is not in short supply. Berkeleyside reported that according to court documents, during a search of Clanton’s home, they found patches and pamphlets associated with antifa and anarchist groups. U-locks, sunglasses, a glove, jeans, and facial coverings consistent with items worn during the April 15 assaults was taken into evidence, along with photos on a camera of Clanton  posing with Anarchist symbols. Police also stated his phone records have him near Civic Center Park on the day of the riot.

At his arraignment Friday morning at Oakland’s Wiley W. Manuel Courthouse, the professor stood alongside his attorney, Dan Siegel, who was a 1960’s student activist at UC Berkeley during clashes with authorities.

“This case arises in the context of a demonstration by a group of loosely described out-of-town, right wingers… who uttered racist and homophobic comments and engaged in pushing and shoving,” Siegel said in a statement to the judge.

He then proceeded to sum up the case as a right-wing attack on Eric Clanton.

“This is a political attack on an individual who has a clean record in this community,” he said. He also told the judge that both he and Clanton had received various threats both online and personally.

The Red Elephants and Taking back America HQ followed Clanton’s lawyer the day of the arraignment and questioned Siegel with video cameras turned on in the hallway outside the courtroom. It is noticeable through the adult exchange in the conversations and the absence of violence and screaming, that there are no liberals taking part.

Police have confirmed Clanton can be seen in videos hitting people in the head with a U-shaped bicycle lock. Due to the violence of the assaults, homicide detectives handled the investigation. Three people received “significant injuries” from the attacks, police said. Investigators served arrest warrants Wednesday at addresses in both San Leandro and Oakland. Clanton surrendered without incident at the Oakland address.

According to the East Bay Times, Police also acknowledged in a statement Thursday that video of the incident, captured by rally goers and subsequently posted on social media, helped them identify Clanton as the suspect behind “several violent assaults” that happened the day of the April 15 free speech rally at Civic Center Park on Martin Luther King Jr. Way.

A group from the web site 4chan poured through endless hours of pictures and video recordings before posting photographs and slow-motion video screen captures of Clanton within days of the attack. They also posted on 4chan pols that they directed all of their research to the authorities to catch Clanton. 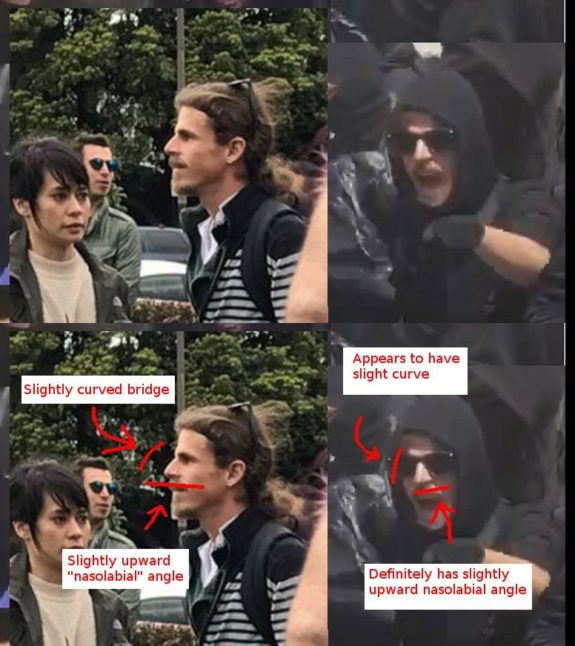 Internet sleuths also dug up additional dirt on the professor turned soon-to-be felon. Eric Clanton’s okCupid profile (now deleted) stated, “I spend a lot of time thinking about REVOLUTION.” He also ordered 14 bike locks, like the one used in the assaults, on Amazon within a day of the attacks.