Black students at Columbia University protested a campus statue of Thomas Jefferson last week by covering the statue, which stands in front of the journalism building, with a Ku Klux Klan hood and posing with signs disparaging Columbia University for celebrating the legacy of a man they regard as a white supremacist, hypocrite, rapist and a “symbol of violence against Black and brown bodies and their consciousness.”

The group protesting, Mobilized African Diaspora (MAD), compiled a statement of complaints on its web site condemning the 103-year-old statue of a Founding Father and principal author of the Declaraton of Independence, Thomas Jefferson himself, Columbia University and white people in general.

The statement refers to Jefferson as the epitome of a white supremacist, and goes on to accuse Columbia University as using black students as a recruiting tool.

“Columbia University boasts a ‘diverse’ student body composed of 42% minorities and 5.4% self-identified Black and Native Americans; yet, the institution continues to honor Jefferson, who enslaved over 150 Black people and referred to them as not being deserving of the basic human rights he outlined in the Declaration of Independence,” MAD states. “Instead, he regarded Black people as “pests of society” to be brutalized, raped, exploited, and monetized. Columbia University adheres to Jefferson’s brand of hypocrisy because it keeps a physical manifestation of the antithesis to Black women’s lives on the same campus that uses illusions of diversity to recruit students. Jefferson’s statue makes it clear that Black students are merely tokens of the university.” 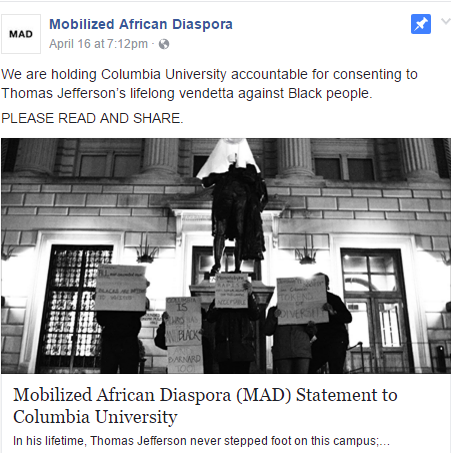 MAD goes on to state the group rejects the celebration of Thomas Jefferson and “by portraying him as a Klansman, a direct representation of the ideals he believed in, we are contextualizing his racist and sexist legacy. Only when Jefferson’s face is hidden in this manner can the sinister reality of his actions and legacy be realized.”

The group then accused the university of “continuing its tradition of silencing Black voices” by removing the display. MAD also states it’s holding Columbia University accountable for continuing to position itself as an anti-Black institution that upholds hypocrisy and white supremacy by consenting to Jefferson’s “lifelong vendetta against Black people.”

On its Facebook page, MAD does not express gratitude for receiving an education at a prestigious university like Columbia, where many white students cannot afford an education, but instead engages in racist rhetoric against white people and believe they can relate to the life of a slave who lived 200 years ago by virtue of their skin color. In one passage, the group marked the birth of American Independence on the Fourth of July by posting a piece of a speech by Frederick Douglass whom escaped slavery in Maryland and went on to become a statesman and national leader of the abolitionist movement:

“What, to the American slave, is your 4th of July? I answer; a day that reveals to him, more than all other days in the year, the gross injustice and cruelty to which he is the constant victim. To him, your celebration is a sham; your boasted liberty, an unholy license; your national greatness, swelling vanity; your sounds of rejoicing are empty and heartless; your denunciation of tyrants, brass fronted impudence; your shouts of liberty and equality, hollow mockery; your prayers and hymns, your sermons and thanksgivings, with all your religious parade and solemnity, are, to Him, mere bombast, fraud, deception, impiety, and hypocrisy-a thin veil to cover up crimes which would disgrace a nation of savages. There is not a nation on the earth guilty of practices more shocking and bloody than are the people of the United States, at this very hour.”

MAD also accuses Columbia University of “complicity in the perpetuation of environmental racism,” which links racism to environmental actions, experiences and outcomes, and is the process “whereby environmental decisions, actions and policies result in racial discrimination.”

The group promotes its cause as “not a singular moment, but the beginning of a movement,” and states, “Mobilized African Diaspora will continue to unearth and illuminate Columbia’s past, present, and future memorialization, facilitation, and manifestation of anti-Blackness. MAD will continue moving forward, demanding that Columbia reconstruct itself and address its anti-Blackness every step of the way.”